“The difference in the work I do now from the work I did before is that it’s more rewarding to be physically exhausted.” – Nicky Rustigan.  Before becoming an operator apprentice, Nicole Rustigan worked as a corporate travel agent. She was tired of getting laid off again and again. Nicole or Nicky, as her co-workers know her, decided to attend the Women in Trades Conference after a lay-off from being a travel agent. Nicky decided it was time to pursue her interest in work that would be more physically challenging.

Nicky already had experienced working on cars and motorcycles while growing up and felt ready to tackle a job that would be more physically demanding. At first, Nicky thought about becoming a flagger.
“I always thought it was neat to be in construction—but I really admired the people that actually built the highways,” said Nicky.
Nicky applied to the apprenticeship program through the Northwest College of Construction in June of 2006. Nicky was surprised to receive a telephone call within two days to come in for an interview. Within the next ten days, Nicky was preparing for the jump-start program.

Nicky shared that her life changed dramatically very quickly upon beginning the program. Many opportunities started presenting themselves. Nicky was excited to be pursuing her dream with a dispatch to the Yaquina River Construction project.
Nicky drove two hours every day, each way, to accomplish her dream of working as a grade checker on Highway 20, which was going through the mountain between Newport and Corvallis.

Nicky graduated third in her class!
“I did that through October and then, unfortunately, I slipped and fell during an erosion control check with the Yaquina River Construction project,” said Nicky.

Not wanting to waste any time in not being able to work at the job site, Nicky began attending the NWCOC equipment operators training program in January of 2007. She said the training was great and helped her relationship with her sixth grader because they were both studying measurements and maps. 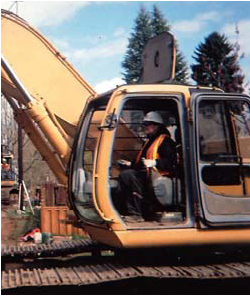 The equipment operators’ class is held on the “Dozer Day” site in Vancouver, so Nicky happened to be at the site when Nutter Corporation visited. Nutter Corporation helps to recruit volunteer operators to assist children attending Dozer Day. Kids get to operate equipment and the proceeds go to support the Vancouver Parks Foundation.

Nicky’s interest led to her being dispatched by NWCOC to the Harold Street project, which is a main sewer line replacement with Nutter Corporation.