After graduating Sam Barlow high school in Gresham in 2000, Jenny McClatchey was hired as an electronic assembler at In Focus in Wilsonville. The money was good, but the work was mind-numbingly repetitive. “The minutes and hours dragged on and on,” she recalls. “It was excruciatingly boring.”

Later, she did marketing for Visa and also became an assistant to a loan processor, but both positions left McClatchey dissatisfied. Two years ago, she was between jobs when an HVAC specialist came to fix the central air conditioning system at her parent’s home. After speaking with Rowdy Blasdell of Century Heating & Air Conditioning in Gresham, Jenny learned the company was hiring. Within a week she was driving a company truck and learning about furnaces and ventilation systems. “I loved it. I jumped in and gave it my all,” she says. Jenny, now 24, was laid off in less than a year, but thanks to a strong recommendation from Blasdell, she landed at HVAC, Inc., in Milwaukie, Ore., a 21 year-old company employing 85 and specializing in design-build commercial and industrial HVAC systems. HVAC, Inc., works on jobs in the $500 to $1 million range in Oregon, Washington, California, and Idaho, netting an annual revenue of $15 million. 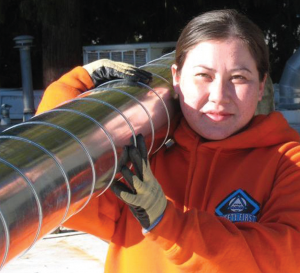 According to company president, Jim Laski, McClatchey who will mark her first year with the company in early March, is the company’s first tradeswoman. “Jenny is smart, eager to learn, and has a great attitude. We’d love to hire more employees like her.”

Laski says, outside of the electricians sector, women are nowhere near reaching their potential in the building trades. “If we can get more high quality people like Jenny, even if they are entry-level, we’re happy to provide the training. That’s why the Northwest College of Construction is so crucial to our industry.” Still in the first year of her apprenticeship, which is paid for entirely by HVAC, Inc., Jennifer makes $11 an hour, half of the journey rate of $22. As with other apprentices, her wages will increase every six months until she completes her training.

So far, about two-thirds of her work is inside, but she has toiled on rooftops in sweltering heat as well as in freezing weather. Jenny, who is half Vietnamese, spends most of her workday helping install ductwork and insulation, but sometimes, during a “crane pick,” she gets to guide the crane operator with hand signals.

“I do grunt work, but so do a lot of foremen,” she says. When she completes her apprenticeship, Jenny might pursue more training in construction management or engineering, but right now she has a full plate. The best thing about her job, Jennifer says, is the variety and the team she works with.

“I like moving around, going to different work sites, exploring new things. I can’t stand doing the same thing.” McClatchey enjoys being the only woman on a crew and says that she’s never had a problem asking for help.  She says her job isn’t for everyone, and certainly not for all women, but she calls it the best experience she’s ever had. “It’s a mans world and you have to adjust to it instead of expecting others to adjust to you. I like the joking and the bantering and I love being one of the guys. When they give me a hard time I give it right back,” she says.