Lawrence Nath is a straightforward guy. The recent Portland Youth Builders (PYB) graduate states that he came to PYB because I needed a job and training to get a job. 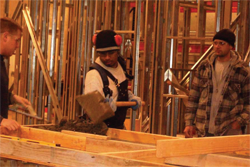 “I was construction illiterate. I didn’t know the materials, or the tools, but little by little I learned the power equipment and everything.”  As it turns out Lawrence took to construction, and by the time he graduated from PYB in 2005 he had been accepted into a construction apprenticeship program through the NWCOC apprentices must work 8,000 hours to graduate from the program, which is the rough equivalent of working full time for four years. The graduation requirements breakdown into specific construction categories, such as finish work,framing, and concrete.Apprentices have the opportunity to work for various employers to meet their requirements.Since graduating from PYB, Lawrence has worked at two different companies, and is currently working for Cedar Mill Construction Company on a remodel of the Justice Center in downtown Portland. [jbutton size=”medium” color=”red” link=”/?page_id=1595#” newpage=”no”]Read more…[/jbutton]

After graduating Sam Barlow high school in Gresham in 2000, Jenny McClatchey was hired as an electronic assembler at In Focus in  Wilsonville. The money was good, but the work was mind-numbingly repetitive. “The minutes and hours dragged on and on,” she recalls. “It  was excruciatingly boring.” Later, she did marketing for Visa and also became an assistant to a  loan processor, but both positions left McClatchey dissatisfied. Two  years ago, she was between jobs when an HVAC specialist came to fix the  central air conditioning system at her parent’s home. After speaking  with Rowdy Blasdell of Century Heating &amp;amp; Air Conditioning in  Gresham, Jenny learned the company was hiring. Within a week she was  driving a company truck and learning about furnaces and ventilation  systems. “I loved it. I jumped in and gave it my all,” she says. Jenny,  now 24, was laid off in less than a year, but thanks to a strong  recommendation from Blasdell, she landed at HVAC, Inc., in Milwaukie,  Ore., a 21 year-old company employing 85 and specializing in  design-build commercial and industrial HVAC systems. HVAC, Inc., works  on jobs in the $500 to $1 million range in Oregon, Washington,  California, and Idaho, netting an annual revenue of $15 million. [jbutton size=”medium” color=”red” link=”/?page_id=1597#” newpage=”no”]Read more…[/jbutton]

“The difference in the work I do now from the work I did before is that it’s more rewarding to be physically exhausted.” – Nicky Rustigan.  Before becoming an operator apprentice, Nicole Rustigan worked as a corporate travel agent. She was tired of getting laid off again and again. Nicole or Nicky, as her co-workers know her, decided to attend the Women in Trades Conference after a lay-off from being a travel agent. Nicky decided it was time to pursue her interest in work that would be more physically challenging. Nicky already had experienced working on cars and motorcycles while growing up and felt ready to tackle a job that would be more physically demanding. At first, Nicky thought about becoming a flagger. “I always thought it was neat to be in construction—but I really admired the people that actually built the highways,” said Nicky. [jbutton size=”medium” color=”red” link=”/?page_id=1614#” newpage=”no”]Read more…[/jbutton]

by Gloria Biersdorff In a brief break of sunshine on a stormy September afternoon, Brandon Plotner descends the ladder from the roof of Calvin Presbyterian Church in Corvallis, Ore. and steps to the wall lying flat on the concrete pad of the church’s future multipurpose room. He had helped construct the wall that morning in a torrential downpour, alongside his supervisor Tom Green, who works for Morris P. Kielty General Contractor, Inc. “I learned a lot very quickly,” says Plotner, who displays the competence and aplomb of an experienced carpenter, in spite of having just passed the 1,000-hour mark as an apprentice (NWCOC). “I don’t think I could’ve gotten on with a better company. Everyone’s been very helpful. There’s so much I need to learn. I try to memorize everything.” Green praises Plotner’s focus and drive. “Brandon is very energetic, willing, wanting to learn, definitely goal-oriented.” Plotner, 27, dropped out of Douglas High School in Winston, Ore. the beginning of his junior year. He had been working in lumber mills for nearly eight years when Reyna, his brother-in-law, told him about the program. [jbutton size=”medium” color=”red” link=”/?page_id=1741#” newpage=”no”]Read more…[/jbutton]

by John Rumler Like most local kids, Jonathon Watson grew up doing farm chores such as bucking hay and putting up fence to keep the livestock contained. As a teenager he worked for Dexter Maust, an energetic man who always had a dozen or so building projects percolating. Whenever he could spare a few hours Jonathon worked for Maust, a generous man who volunteered for Northwest Medical Teams and went to Oaxaca, Mexico, three times to build water systems in poor rural areas. “Just being around him you learned so much about carpentry, concrete, steel work, plumbing, electrical… he could do it all. Dexter was a doer, a visionary. I was in awe of him and wanted to follow in his footsteps.” [jbutton size=”medium” color=”red” link=”/?page_id=1753#” newpage=”no”]Read more…[/jbutton]   Read More